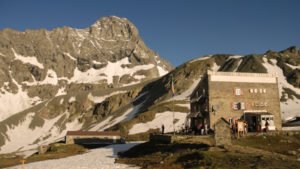 One of the first high mountain alpine refuges in the Alps, situated opposite the vertical rock face of the Uja di Bessanese (3601m) and the sharp moraine ridge of its disappearing glacier, the Gastaldi Refuge is an outpost for various excursions, alpine ascents, as well as a stopover on the Tour della Bessanese.
The climb to the Gastaldi Refuge offers the chance to enjoy the colourful array of flowers at Pian dei Morti in late June/early July, as well as panoramic views of the rocky peaks which form the watershed between Italy and France; you can also observe wild animals including alpine ibex, chamois, marmots, eagles and bearded vultures.

Roberto Chiosso is an expert refuge-manager who can offer advice to walkers on the best routes and the condition of footpaths; he is attentive to the needs of his guests and offers a warm welcome in the refuge. Not one to sit idly, he has actively promoted and developed the Tour della Bessanese and access to the refuge, as well as creating a themed itinerary near the refuge (the glacial lake circuit); he also supports the Scientific Research project on the glacial basin of the Bessanese and organises evening events at the refuge, to give just a few examples of what he does.

“I inaugurated the path around the glacial lakes for Roberto by organising a themed walk based on the book “La sposa dell’aria” by Marco Albino Ferrari and taking some of his guests on a guided walk.”

Weekend trips with a night at the refuge are often organised, but the Gastaldi can also be visited on a one-day excursion from Pian della Mussa.